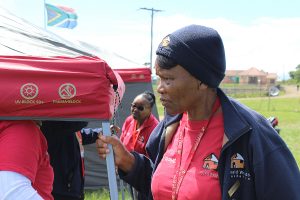 Two year ago, Nongilani Pokolwana was pain-ridden and increasingly anxious about her failing health.

The 56-year-old mother of three had developed severe, debilitating chest and back pain, which had left her unable to carry out even the most basic of household chores.

Repeated visits to her local clinic in rural Mbashe had failed to diagnose the source of her pain, or offer any treatment plan beyond a handful of pain tablets.

When the Donald Woods Foundation visited Nongilani in early 2013 as part of their innovative Health in Every Hut (HieH) screening programme, she was desperate. “I knew something was wrong,” she says. “I was in a lot of pain every day and the pills they gave me at the clinic did not help at all.”

The DWF’s Sister Stella Bili (pictured above) – affectionately known as Mama B to her thousands of rural patients – measured Nongilani’s blood pressure and glucose levels, and tested for a range of potentially undiagnosed conditions such as HIV and TB.

Based on the location of her pain, as well as the referred pain in her back, Sister Bili also decided to perform a thorough breast exam – which immediately revealed the presence of a lump in her left breast.

“She immediately told me what it could be and what we needed to do,” Nongilani says. “I was very scared but Mama B told me everything that was going to happen and what I needed to do.”

Sister Bili referred Nongilani to the local hospital and facilitated her transport there. A subsequent biopsy in East London, 400km away, confirmed that the lump in her breast was cancerous. And while the treatment Nongilani eventually received, in East London and later in Cape Town, could not save her breast, she has little doubt that Mama B’s diligence and care almost certainly saved her life.

“Mama B came every week to see how I was doing, and always asked what I needed and how she could help.”

After her diagnosis and initial treatment, Nongilani continued to be visited by a DWF community health worker (CHOW) every week to assess her recovery. And when she developed internal complications a few months after her initial surgery, the DWF Chow assigned to her care immediately arranged for her to be referred back to the local hospital for follow-up care.

“The Donald Woods Foundation has helped us so much since I became sick,” Nongilani says. “I think Mama B saved my life, and she is still helping me even today.”

Read More
November 8, 2016
Donate today © Copyright Donald Woods Foundation 2003-2016. All rights reserved.
‹ › ×
We use cookies to ensure that we give you the best experience on our website. If you continue to use this site we will assume that you are happy with it.Ok