In addition to its many other functions, the Donald Woods Centre at Hobeni is also home to the comprehensive J H Soga Library and Archive. 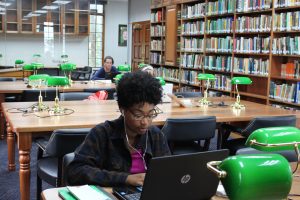 Meticulously curated by leading anti-apartheid activist David Kenvyn, the facility is the most detailed record yet of Woods’ decades-long struggle against apartheid, his friendship with Steve Biko and his subsequent persecution at the hands of the security police during the B.J. Vorster regime in apartheid South Africa. The collection contains 1 102 books and well over 3 000 documents, posters, videos, audio tapes and posters, including many rare or never-seen-before items. Chief among these are hand-written notes from Bobby Kennedy, Jimmy Carter, Oliver Tambo, Nelson Mandela and Richard Attenborough.

Kenvyn, a retired librarian, has also discovered and archived notes from Peter Gabriel, David Bowie and Paul McCartney – the latter a music score, signed and with a personal message.

There are several box files of documents, newspaper cuttings and archives that are catalogued, many of which are either articles by Donald Woods or stories about his relationship with Steve Biko, and the consequences of that relationship as portrayed in the film Cry Freedom.

“There are those who think that Donald Woods took up the anti-apartheid cause because he met Steve Biko,” says Kenvyn. “And while there is no question that this meeting was of major importance, and that meeting Biko changed Donald’s life, he was already an opponent of apartheid. What becomes clear (from the archive) is that Donald was at the heart of the struggle for one person, one vote from his early 20s.” – David Kenvyn

Who was J H Soga?

John Henderson Soga was a son of the famous Tiyo Soga, the first African ordained minister in South Africa. Like his older brother William Anderson Soga (a medical doctor and missionary), John Henderson studied in Scotland and was ordained as a clergyman. His Master’s thesis was on the amaBomvana people. Both J. H. and W. A. married Scottish women, like their father Tiyo and both worked at Miller Mission which is near Hobeni. Miller Mission was founded by W.A. Soga in 1888 and following his retirement from missionary work to concentrate on medical work, John Henderson took over Miller Mission in 1904 until 1936.

J. H. was and is still considered the first historian of the amaXhosa. Two important historical books were written and completed at Miller Mission by him – The South Eastern Bantu (1930) based on Xhosa oral traditions and testimony collected by Soga and The Ama-Xhosa, Life and Customs (1932). Like his father, J. H. Soga wrote Xhosa hymns and prayers, and translated the work of others into isiXhosa. In 1924 he served on a committee to revise the Xhosa Bible, and in 1927 he published his translation of the second part of John Bunyan’s Pilgrim’s Progress. He also translated books on health and travel into isiXhosa.

The mission community at Elliotdale and Miller Mission was said to be large and racially integrated at the time. Soga’s parishioners, irrespective of race, liked him and he was deeply respected, although he did apparently experience racism when travelling outside his home district. This fact may have contributed to his decision to settle in England after his retirement according to some sources. J. H. Soga, his wife and children were tragically killed in a German air raid over Southampton, England, during World War II in 1941.

The connection with the Woods family

J. H. Soga’s piano was gifted to Donald Woods’ father Jack. The piano, still bearing the pipe stains of John Henderson, is currently housed in Masumpa’s at the DWC. Both Donald’s parents, Edna and Jack are buried at Miller Mission.

In fact, a local doctor and Soga descendent, Dr Lex Soga, is said to have remedied a medical complication with Donald following a 40 km horse ride from Dutywa.

Donate today © Copyright Donald Woods Foundation 2003-2016. All rights reserved.
‹ › ×
We use cookies to ensure that we give you the best experience on our website. If you continue to use this site we will assume that you are happy with it.Ok